Back in May, Google announced a new calling feature for its Google Home device. With it, you can make free phone calls to anyone in the U.S. and Canada, for free. And after several months of waiting, the feature is finally live! 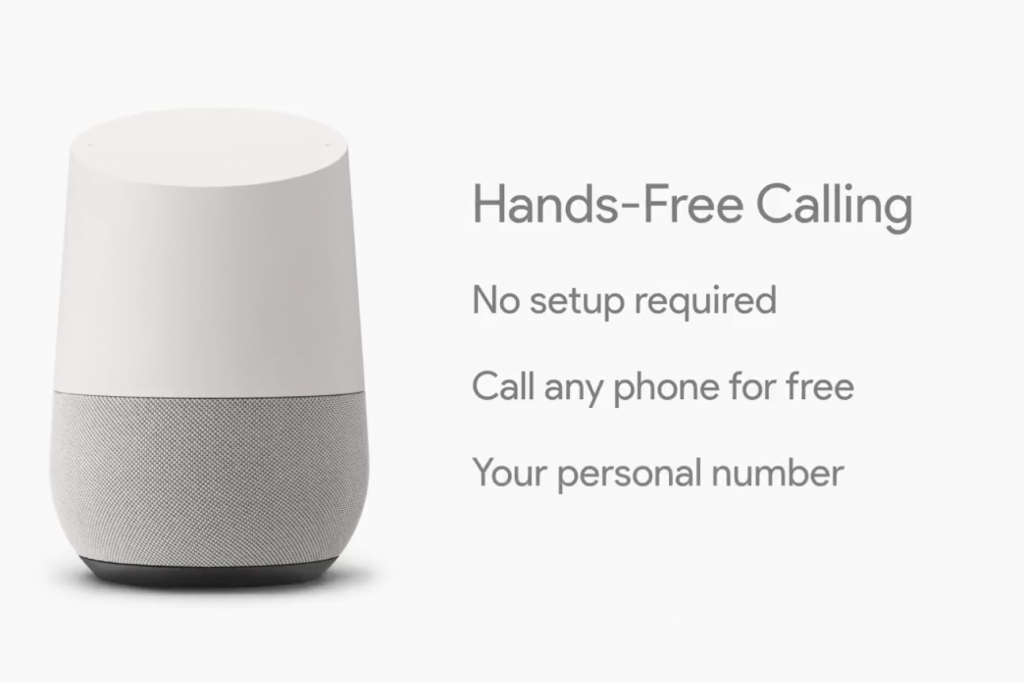 How to call someone

To make a call from your Google Home, say the hot-word “Hey Google, call (the name of the person or business you want to call).” It’s that simple. You can also call a number by reading it aloud. And because Google Home supports multiple users, if you and your partner both have “Mom” in your contacts, it can tell whose Mom it needs to call—which is great, because who wants to call their mother-in-law intentionally?

You can also ask your device to find the nearest business, like “What’s the closest pizza place?”—then say “Call them.” Because Google has millions of businesses in their database, chances are you won’t have any trouble making calls to your local stores, restaurants, or even customer service and support centers. And if the place you’re calling has a menu or phone tree, you can still use your voice to navigate to a representative. But if you need to touch numbers to get through the menu, you’re out of luck.

Calls use your home’s Wi-Fi network—so they don’t use any of your phone plan’s minutes. But your phone and Google Home need to be connected to the same Wi-Fi network. And if you’re one of those people who has a questionable Wi-Fi connection, you may want to think about updating your router. Phone calls shouldn’t take up a lot of bandwidth, but if you make a call while doing something like streaming a video, your experience may be less than optimal.

Some other things to know before making a call

Since this is a brand new feature, it’s obviously not perfect (yet). So here are a few other things to know so you have the best experience when calling with your Google Home:

• The person or place you’re calling won’t see your phone number or your name unless you’re a Google Voice or Project Fi customer. Instead, they’ll see “unknown” or “no caller ID.” If you are a customer, you still need to link your phone number to your Google Home. If you’re not, Google has said they’re working on solving this problem before the end of the year. For now, if you’re calling a friend, don’t be surprised if you get voicemail.

• You can’t receive incoming calls, yet. So if someone calls you from a Google Home, you can’t pick up on your Google Home.

• You can end calls on your Google Home by tapping on the top of the device or saying, “Hey Google, stop/disconnect/end call/hang up.”

• You can put calls on hold. To do this, just ask Google Assistant to put the call on hold, or press and hold the top of your Google Home device.

• You can talk to Google Assistant while on a call. With your call on hold, you can ask your Assistant questions or to complete actions. The person you’re calling can’t hear what you or your Assistant says. And the person you’re on the line with is muted. When you’ve finished, the call will automatically resume. However, while you’re on a call, there are a few things you can’t do with your Assistant, like listen to music, news, or podcasts, make another phone call, play games, and more.

• 911 services aren’t currently supported—most likely because 911 uses the location from your mobile device to pinpoint your location in an emergency. But it sounds like Google is working on it.

• International and premium rate numbers (1-900) aren’t supported either unless you’re a Project Fi or Google Voice customer with credits or an international plan. But why are you calling 1-900 numbers in the first place?

Recently, Amazon also enabled calling on Echo devices. However, there are a few distinct differences between calling on an Echo versus a Google Home:

• Echo (for now) can only make calls to other Echo devices. Google Home calls a person or business’ actual phone—so it’s much more practical for day-to-day use.

• But because it can call other Echo devices, users can also make video calls if both people have an Echo Show. Google Home only supports voice calls.

• Echo users can use the Alexa app on their phone to also make calls to other Echo users when they’re not near their device. But there’s also this handy thing called a phone, you know if you need to make an actual call.

The calling feature is a welcomed addition to Google Home. It’s something Echo users can’t currently do. And if you’re looking to get Apple’s new HomePod later this year, it seems like it won’t have this feature, either. It may not be the primary reason you buy it over a competitor product, but if you’re on the fence, it certainly helps.