This week at their annual developer’s conference, Apple unveiled its new operating system for iPhone and iPad: iOS 11. And as with all versions of iOS, there are hundreds of new features. Some are immediately noticeable and even demoed on stage or on Apple’s website—while others may go unnoticed. But sometimes it’s the ones that don’t get a lot of press that enhance your experience with your iOS device even more. Here are nine of the best features of iOS 11 that could change the way you use your iPhone and iPad for the better. 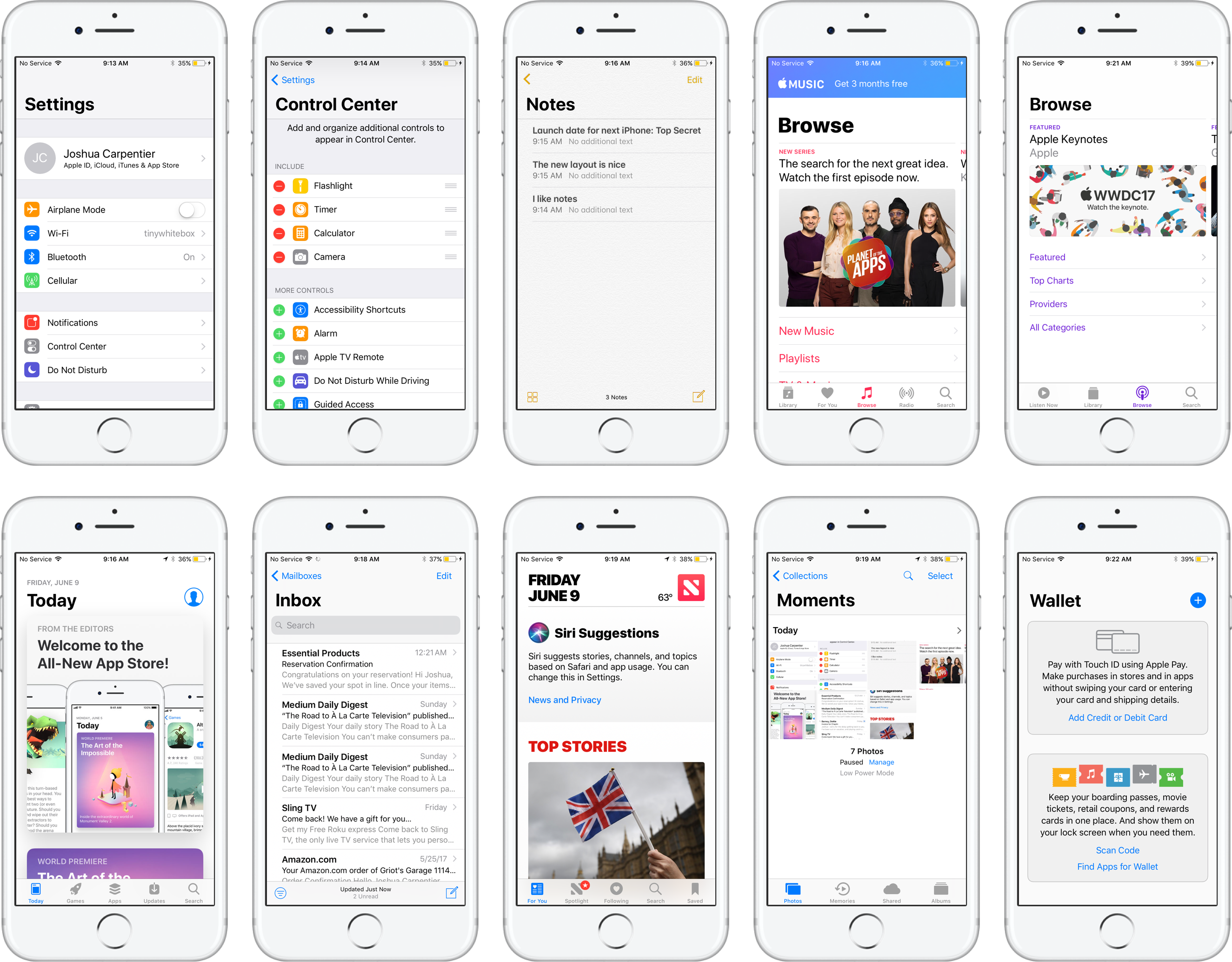 Apple lives by five pillars when it comes to their products and services: design, ease of use, convenience, security and privacy, and peace of mind. These ideas and even these exact phrases are everywhere throughout their website. Since iOS 7, Apple has made strides to make the apps on your iPhone and iPad look and feel similar to how they do on a Mac. But there’s never been a complete uniformity to everything. Apple’s looking to change that going forward.

With iOS 11, a large number of apps—like Settings, Music, News, App Store, Mail, Notes, Contacts, and more—have an almost identical look and feel to them. And that interface crosses over to some apps on the Mac in macOS High Sierra, too. This uniformed interface is important to Apple, as it makes using iPhone even easier. It gives users peace of mind that they already (in some way) know how to use other Apple apps, even if they’ve never opened them before. And ultimately, that visual uniformity is what helps convince users also to get a Mac—and possibly even an iPad—as they won’t have to “relearn” how to use a new computer.

While this move is a great start, Apple’s not quite there yet. There are still some key apps in iOS 11 who don’t adopt that uniformed appearance—like Calendar, Maps (not surprisingly), Reminders, Health, and even the iTunes Store and iBooks Store. Hopefully, those will get updated soon, too. But for now, it’s encouraging to see Apple moving in this direction.

If you’ve ever tried to move information over from your current iPhone to a new iPhone, you know that it sometimes can be a time-consuming and painstaking process (I can hear all my former retail team members cringing in pain as I say this). And that’s not because moving to a new iPhone is necessarily difficult. But people don’t usually realize just how much stuff they have on their current phone. And moving things over—especially on iffy Wi-Fi—can be challenging. So in iOS 11, Apple has a new feature that should help (in some small way) to alleviate some of that transfer process with Automatic Setup.

With Automatic Setup, you hold your new iPhone or iPad over your previous iOS device (kind of like scanning a much nicer looking QR code) to automatically transfer many of your personal settings, preferences, and iCloud Keychain passwords. There’s no word yet on if this could also work with other information on your phone—since most of the other things you’d care about (app data, photos, contacts, etc.) are in iCloud. But this can at least get your new iPhone or iPad up-and-running with some necessary settings while the rest of your device restores in the background.

This could be one of the biggest, and most useful, things in iOS 11—so much so, I wrote a post dedicated to just this feature. With Apple Pay in Messages, you can not only send money with your credit or debit card (securely, of course), but you can even request and receive money, too. And Apple introduced Apple Pay Cash: an Apple-based debit card inside Apple Pay. When you receive money, it’s automatically (and again, securely) kept in Apple Pay Cash. And it’s instantly available, so you can send money to someone else, transfer it to your bank account, or use it to make purchases in places that accept Apple Pay in store, online, or in apps. So if you’re someone who’s never felt comfortable with putting your card details into Apple Pay, here’s an easy way to still use the feature without handing over your information. Plus, this could be a great way for parents to give their kids money and teach them about bank accounts without having to open one (because let’s be honest… do kids want bank accounts?). It’s Apple’s way of taking on Venmo and Square Cash. And it could be the first step to a much larger focus for Apple moving forward.

One-handed typing with the QuickType keyboard

We’ve all seen it: that one person who can’t quite cope with a large phone, but seems to think they can respond to a text while trying to drink their coffee or walk their dog—only to get a harsh dose of reality when their hand slips and their phone goes a tumblin’ to the ground. Ouch. But now with one-handed typing in iOS 11, you can easily move your keyboard to the left or the right of the display with just a tap. Meaning less reaching your stubby thumb across a large screen while juggling the phone in your small hand (in constant fear)—and more comfortably gripping your phone while typing that all important “happy birthday” message that just couldn’t wait. Technology!

Do Not Disturb While Driving

We’re all trying to find ways to drive safer. And Apple feels that the new Do Not Disturb While Driving feature in iOS 11 will help us stay focused on the road, instead of on that notification. The feature uses Bluetooth to understand when your iPhone is connected to your car and Wi-Fi Doppler effect to measure when you’re moving in your car. When Do Not Disturb While Driving is on, your iPhone’s display turns off—and even shows you a lovely reminder the feature is on if you’re tempted to turn your display back on. But if you’re a passenger in the car (or you’re just cheeky and say that you are), the feature turns off and you can access the phone once again.

You can also set up auto-responses—so if someone texts you while you’re on the go, they’ll receive a message letting them know you’re driving and can’t respond. But if you’re expecting an important message, you can enable select people to break through—so you don’t have to worry about missing it.

It’s a great feature to have, but it’s a bit odd that this is still the only option for iPhone users. During the announcement of this feature, Apple said that the safest solution for interacting with your car when doing things like playing music is CarPlay: Apple’s in-car infotainment system. But because CarPlay still has limited availability, it would seem like making an app for iPhone that has a similar CarPlay layout when driving—much like Google has with Android Auto—would be a great alternative instead of turning off the display altogether. It gives users a safer way of interacting with their phone while driving and gets them familiar with CarPlay.

You can finally control Control Center 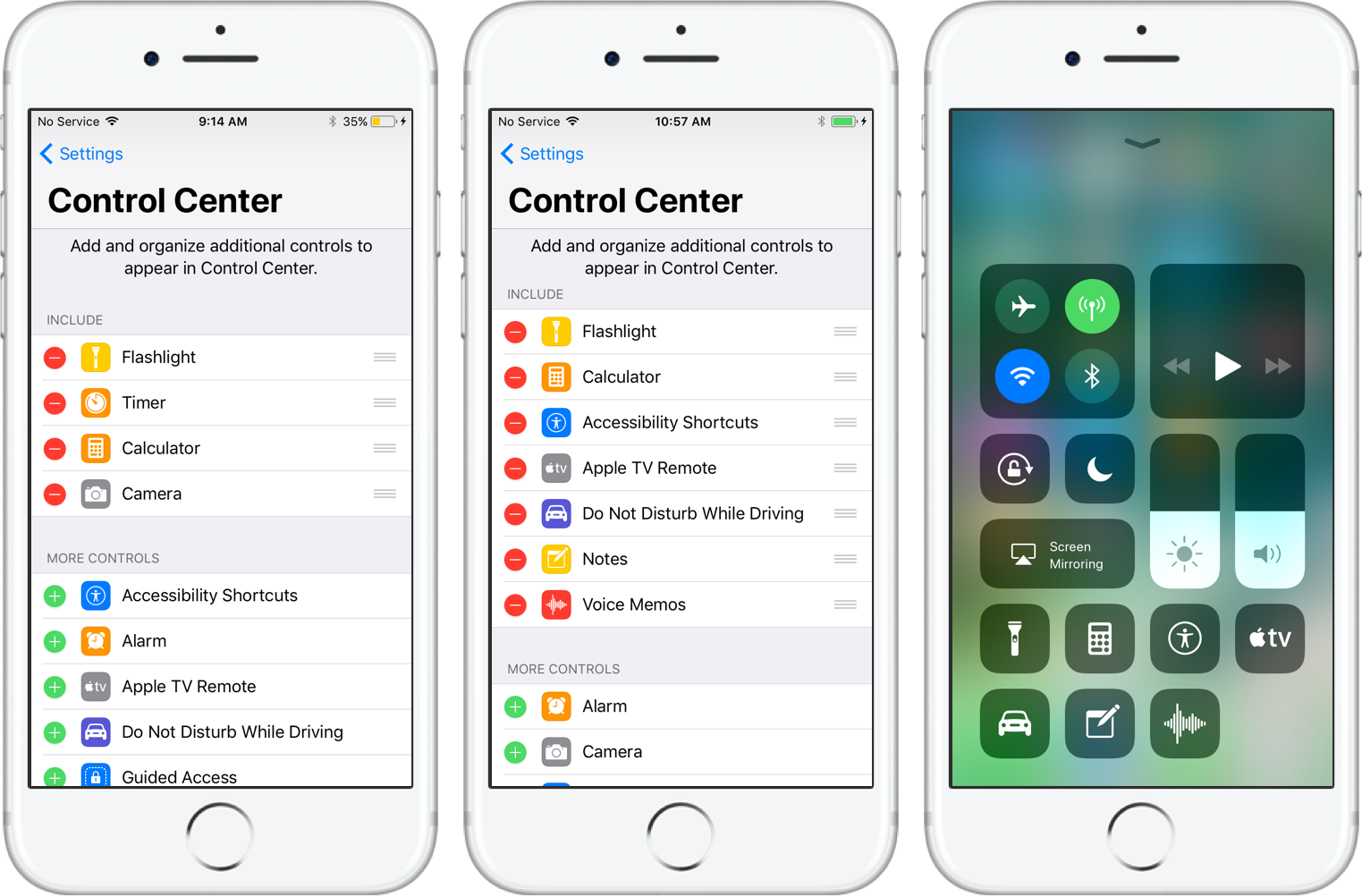 Users were both happy and frustrated with Control Center when it was introduced a few years ago. It was Apple’s version of a long-standing Android feature that gave users quick access to commonly used controls and apps. But because there wasn’t a way to adjust or change what options you saw in the panel (I don’t care about having a shortcut for Airplane Mode), it caused some frustration among users—and it quickly became one of the biggest requests from iPhone users. But finally, with iOS 11, you can now customize Control Center!

You can add and manage shortcuts for a variety of existing and new features—including Do Not Disturb While Driving, Notes, Apple TV Remote, and even Accessibility Shortcuts. And with 3D Touch, you can go even deeper with how you access each shortcut (although that’s not new). This is a welcomed and massively useful feature, and should finally appease many Apple users. Now if only they added the ability to long press the Wi-Fi to open my wireless settings like on Android… but I can dream.

Maps finally gets two of Google Maps most useful features 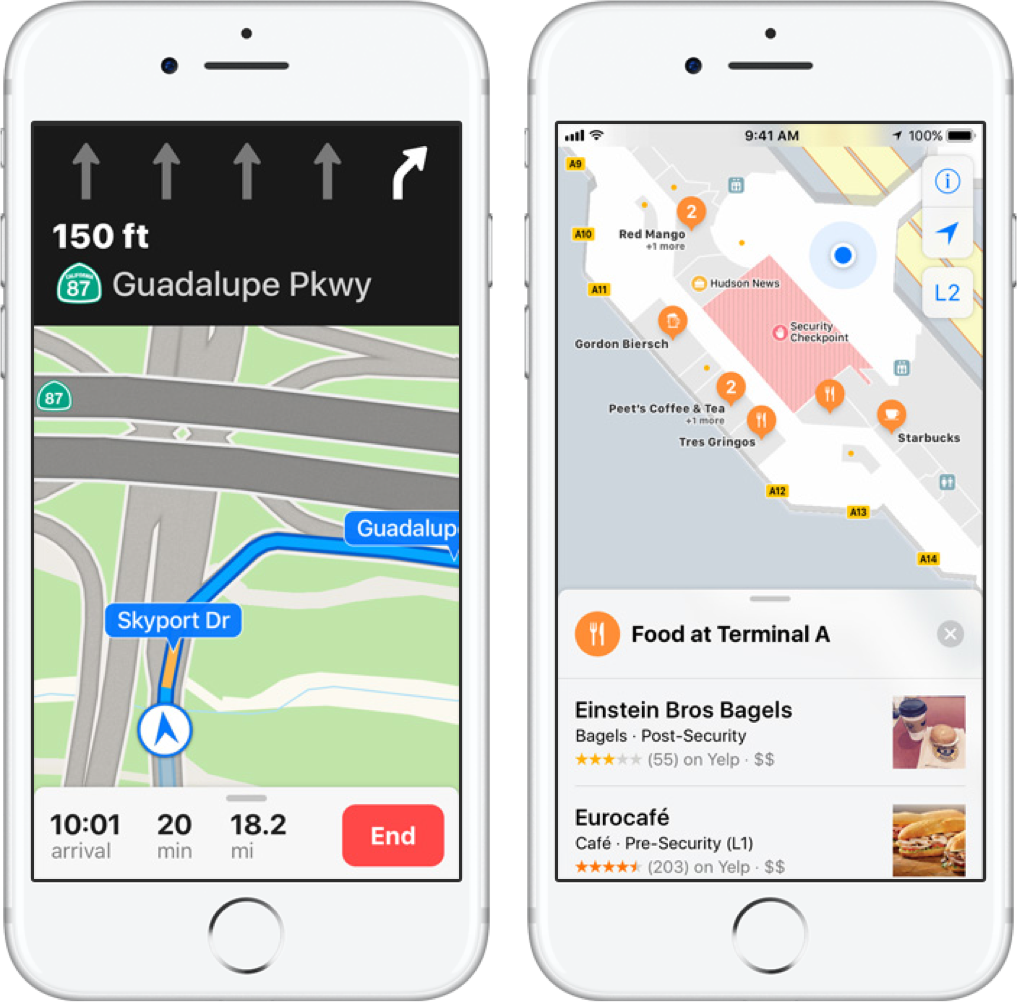 Finally (…FINALLY) Apple Maps gets a major update in iOS 11 with Lane Guidance and indoor maps. These two features have existed in Google Maps for years—and on full GPS navigation systems for even longer. With Lane Guidance, you can see the number of lanes and the direction that lane allows you to drive. This is especially useful when exiting a freeway or making a turn. Indoor maps are fantastic for finding places or locations in large venues. For example, if you’re in a mall, it can not only show you where in the mall your store is located but on which floor—or where a specific department is in a large store. These are two features that have kept me using Google Maps more than Apple Maps. But now, it might be time for a change.

This may very well be the single biggest requested feature from iPad users since multitasking—and it’s finally here. With Drag and Drop, you can easily move things like text, photos, files, webpage links (URL), and more from one app to another—either when side-by-side in Split View, or between apps using multitasking. And because iPad supports multitouch, you can easily select and move multiple items at the same time. Drag and Drop and multitouch also make it much (much) easier put several apps at once into a folder, or move multiple apps between screens at the same time.

For years, Apple has tried to convince people that iPad can replace their PC. And while there are certainly some people that’s true for, it’s never been realistic for most people—especially with the limitations that still existed with the device. Better multitasking and now Drag and Drop quells a lot of objections for PC users. But there was one major feature still outstanding that prevented people from seeing iPad as a legitimate PC replacement—and Apple just introduced it.

The Files app (again, finally) brings a dedicated, and sorely needed, data management system to iPad. You can browse, search, organize and manage all your files in one, dedicated place. And best of all, it’s not just Apple-based files. It also works with files in other apps, and across cloud services, like Box, Dropbox, Google Drive, and more.

This is by no means a full list of all the new features iOS 11 has to offer. There are lots of awesome features, like Inline Drawing, Instant Markup, and a new way to access subkeys with QuickType for iPad; new ways of making Live Photos more expressive with Bounce and Loops; AirPlay 2; Siri Translation; and much more. And arguably, one of the most intriguing things about iOS 11 is ARKit: a new way for developers to make 3D-based augmented reality apps for your iPhone and iPad. But as amazing as it is, it’s still very early days for AR on iOS—and probably won’t start to have any significant impact on how you use your iOS devices for at least a year. But it’s exciting times ahead for Apple users. And as we get closer to the next iPhone launch, we’ll continue to see how iOS 11 evolves.

iOS 11 is available this Fall for free. But if you can’t wait, you can download the public beta onto your device very soon.