How To Use Wireless & Fast Charging on iPhone 8 & iPhone X

With the announcement of iPhone 8, iPhone 8 Plus, and the tenth anniversary iPhone X, Apple finally introduced a feature iPhone users have been asking for, for the last few years: Fast Wireless Charging. But what many customers probably don’t realize, is that this is actually two features—as all iPhone models this year have both fast-charging and wireless charging. Here’s the difference between them, as well as how to use each one—so you have the best (and fastest) experience when charging your iPhone.

Wireless charging isn’t really wireless, but it’s close—as you still need to plug the charger, itself, into a power outlet (which is one cable). After that, you just rest your phone on top of the charging pad (even if it has a case on it) without plugging in any further cables. In order to charge your iPhone 8 or iPhone X using wireless charging, you need one major thing: a wireless charging pad that uses the Qi charging standard.

Qi (pronounced: CHEE) is a common wireless charging standard. And it’s the one found most in public places, like airports, resturants and cafes, hotels, and more. Qi isn’t the only wireless charging option, but it’s the only one that’ll work with iPhone 8 and iPhone X. Currently, Apple offers two options on their site: Belkin’s BOOST↑UP and mophie’s wireless charging base. But Apple has said they’re working with a number of companies to bring more options, soon.

Car makers are also getting into the wireless charging game—with vehicles like Toyota’s Prius Prime, Ford’s F-150 truck series, BMW Series 7, and more. However, as convenient as wireless charging is, it may not be the best option when it comes to charging your iPhone. That’s because Apple is limiting the amount of charge iPhone 8 and iPhone X can receive.

Qi wireless charging is capable of delivering a charge of 15-watts—which can take your battery from 0 to 50% in around 30 minutes. That’s what’s known as a “fast charge.” However, the new iPhone models will only support a wireless charge of 7.5-watts at its maximum—and that’ll be sometime later on after a software update. For now, iPhone 8 and iPhone X can only handle a wireless charge of 5-watts. That’s the same amount you’d get if you charged your device using the plug and cable Apple includes in the iPhone box. In other words, not fast. And while both the Belkin and mophie offerings are capable of delivering the faster 7.5-watt charge, they’re not capable of the Qi fast charge standard of 15-watts (womp womp). Luckily, iPhone 8 and iPhone X do have a way of charging it much faster… but it’ll cost you. 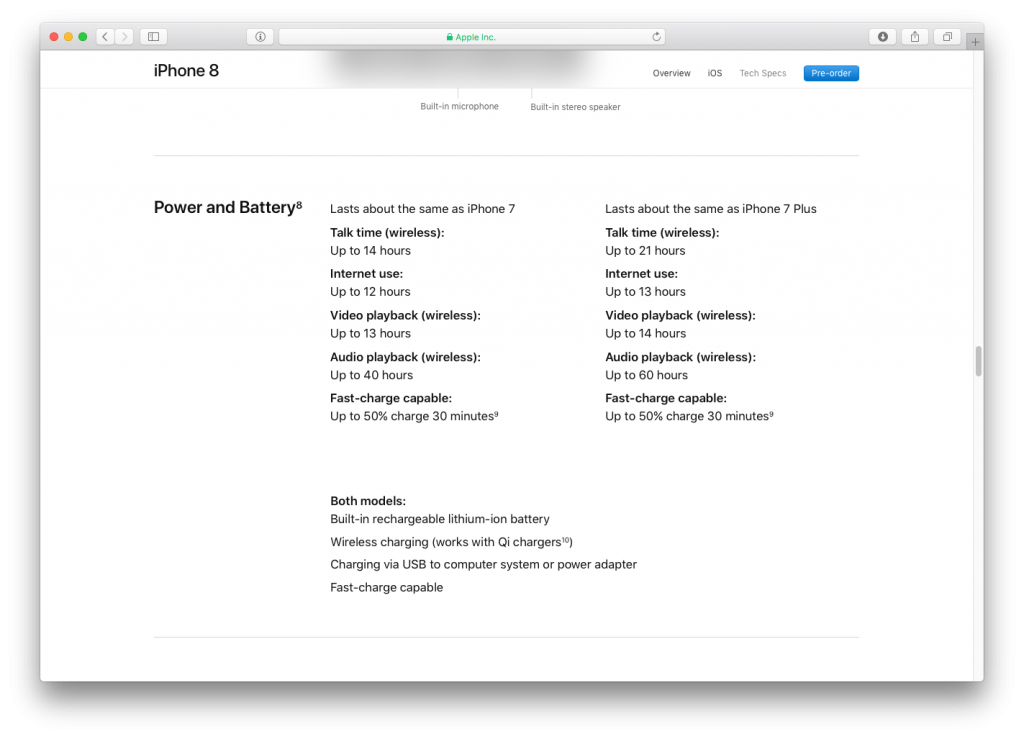 If wireless charging doesn’t quite fit your hectic and impatient lifestyle, then fortunately, you can use fast-charging on iPhone 8 and iPhone X—so you can charge your battery from 0 to 50% in around 30 minutes. Unfortunately, it doesn’t work with the plug and Lightning cable included with iPhone. So to take advantage of this feature, you’re going to have to spend a bit more money. But hey, you’re an iPhone user. So that’s nothing new.

The first accessory you’ll need to buy is an Apple USB-C Power Adapter. The 29-watt option should do the trick. If you have the newer MacBook models that use USB-C, then you already have this adapter. If you don’t, it’ll run you $49. And that doesn’t include the Lightning Cable (that’s the second accessory). Currently, this isn’t a visible option in the iPhone Accessories section. To find it, you’ll need to visit the Mac Accessories section.

The Lightning to USB cable that comes with iPhone is a USB-A version. That means it uses older technology incapable of transferring higher speeds. To put it more plainly: think of how long it takes you to move, say, a movie or picture with new computers or newer protocols like USB-C, USB 3.0, or Thunderbolt (hell, even Wi-Fi) from your phone to a computer. Now, think of how long it took you to transfer those same things five or six years ago. Yeah… So you’ll need to buy a USB-C to Lightning Cable. On Apple’s site, a 3-foot cable will run you $25—and a 6-foot will cost you $35. So to take advantage of that quicker charging, you’ll have to fork out an extra $75-$100—assuming you don’t buy an aftermarket option (which is always a bit questionable).

Wireless and fast charging are great additions to iPhone 8 and iPhone X. And while they may not be perfect, at least Apple is working with a more common standard (Qi). So consumers don’t necessarily have to spend more money on proprietary options to take advantage of newer features… at least, until AirPower comes out.